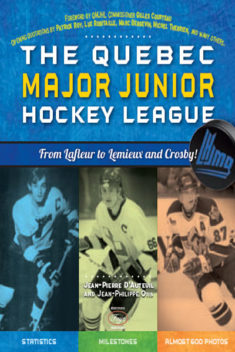 Those of you who have been eagerly awaiting a bible on the highlights of the Quebec Major Junior Hockey League through more than forty years of history will certainly not be disappointed by this book; a publication that offers unique content, filled with statistics, photos, anecdotes, records and news items distributed throughout its 288 pages.

Although the QMJHL began operating in 1969, until now little information was available regarding its main actors: players, coaches, officials and others who first took to the ice under the tutelage of the League’s founder, Robert Lebel. At that time, the QMJHL was represented by eleven organizations: the Drummondville Rangers, the Laval Saints, the Quebec Remparts, the Rosemont National, the Shawinigan Bruins, the Sherbrooke Castors, the Sorel Eperviers, the St. Jerome Alouettes, the Trois-Rivieres Ducs, the Verdun Maple Leafs and the Cornwall Royals.

With thousands of outstanding players passing through its storied history, the Canadian Hockey League (CHL), which includes the Quebec Major Junior Hockey League, the Western Hockey League (WHL) and the Ontario Hockey League (OHL), is unquestionably recognized as the best development league in the world. Year after year, approximately half of the players drafted by National Hockey League clubs originate from the CHL. These results underline the reasons why hundreds of players from Canada, the United States and Europe choose to pursue their development and hone their skills at the CHL.

Today, the QMJHL is more than a development league. While it is undoubtedly recognized as a formidable institution that allows its players to exceed their limits and perfect their skills at the dawn of a prolific career in professional hockey, the QMJHL is also recognized as a springboard to an equally rewarding career in Canadian universities or in the marketplace.

Its primary mission is to develop players for professional hockey while supporting their academic endeavours in order to help them become responsible and educated citizens.